Despite 2020 being the 100th year since the club was first established, the Ardmona Cats had fallen on hard times and in 2019, faced the prospect of being suspended from the Kyabram District Football Netball League.

At the the eleventh hour however, a reprieve was granted and hope was restored when AFL football national treasure, Shane Crawford put his hand up to offer some coaching for this season, an opportunity for the club to get itself off the bottom of the ladder.

Aside from the on field activity, the club has also been engaged in restoring their clubrooms and grounds. A few weeks back, Mooroopna Hardware provided enough paint for some volunteer painters at a club working-bee to repaint the exterior while others carried out renovations of the netball shelter and began work on the grounds and car park.

The attitude around the club, thanks to the inclusion of some new blood at the committee level is creating the enthusiasm the club needs to get back on top and chase their sixth premiership flag with the league.

On the field, Shane said, “I have made it clear, this is their club and it is up to them to make the changes they need. We will see how it goes.”

Supporting ‘Crawf’, as those around the club have adapted to calling him with an air of familiarity, is Matt Hannon, the mayor of Berrigan Shire Council in New South Wales, who travels down once a week to help at training.

While president of the club, Tim ‘Plugger’ Magann has been around since he was 15, others like Georgia Linton, the club secretary, joined about six months ago and Teisha McCoy, the club treasurer and Penny Browne, the vice president joined last year and were immediately enlisted to help run the club.

The club presents itself as a family, a community, possibly reminiscent of the early days when it was first formed. We can only wish them all the best for their endeavours this season, they are making all the right moves. 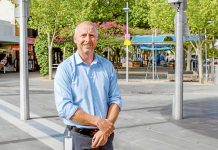 Nominations for the 2019 Business Awards are now closed