PLAYERS throughout the Kyabram District League (KDL) will shake hands this weekend as part of their commitment to reduce, raise awareness and prevent family violence in the annual ‘Say No to Violence’ round.

Hosted by the Hume Dhelk Dja Regional Action Group and in partnership with the Kyabram District League and AFL Goulburn Murray, the aim of the round is to raise awareness of family violence across the fifteen participating clubs in the KDL using the motto: ‘You can’t shake hands with a fist.’

A feature match will take place this Saturday, May 25, at the Undera vs Lancaster game at Undera Recreation Reserve. Kicking off with a community luncheon at 12pm, there will be a jumping castle, rides, face painting and half time entertainment from local artist Bricky B.

Before the match, players will be addressed with an inspiring message, followed by a voiceover from the AFL Goulburn Murray’s Domestic Violence Campaign. It will feature footballers from across the region making a collective, bold and public statement that violence against women is not acceptable and that it is time for men to stand up and speak out.

Hume Dhelk Dja Regional coordinator, Tracy Hardie said, “The partnerships sustained with the KDL and the AFL Goulburn Murray has enhanced the Dhelk Dja Action Group and has shown unity for our Aboriginal communities.

“With over fifteen clubs’ seniors and netball players participating, the ‘Say No to Violence’ round opens the door for a whole community response and most importantly, it creates a foundation for a regional response to reduce, raise awareness and prevent family violence, while working together for a future for all.”

The Action Group, KDL and AFL Goulburn Murray will also introduce an Indigenous round in late July, as well as offer cultural awareness and identifying risks training for league officials, club delegates and coaches, provided by the Hume Dhelk Dja Regional Action Group. 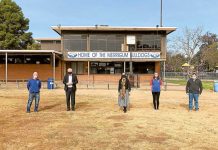 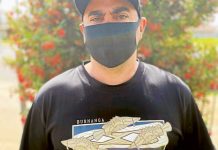 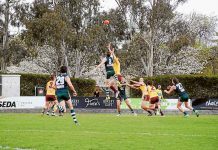