This last week, they have learned that the administrators have forced the closure within the next two weeks.

Local State Member for Euroa, Steph Ryan said, “I am deeply disappointed by how this process has been handled. Damian Drum has been doing a power of work behind the scenes, but we need the liquidators and the State and Federal Governments to pull their weight.

“I am gobsmacked that three expressions of interest were received, yet none of the interested parties were even contacted by either the liquidators or the federal department.”

Damian Drum said, “The future of DP Jones Nursing Home is not something I wish to comment on at present, as I continue to fight for its future behind closed doors. I care passionately about this issue and along with the community I want to see the best resolution achieved for Murchison.”

The 40 bed, not-for-profit aged care home will now repatriate all of its residents to other aged care homes around the district while the town considers the forthcoming loss of around 70 jobs as well as their neighbourhood house, medical centre and pharmacy. 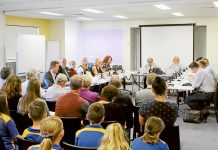 Peter and Maria Copulos Foundation donate $1,000,000 to the new SAM