When the call first went out by Dutch children’s author, Nina Koet, now living in Greece who was looking for an illustrator for her new book, local Stanhope artist, Kym Patten submitted some of her sketches.

Nina liked her style and commissioned Kym to go ahead and produce a series of illustrations to go with the story she had written.

For Kym, it’s quite satisfying. Having recently returned to Stanhope where her father’s family had lived for many years, Kym was able to raise her two daughters, Mayley, 8, and Evie, 6, while working on the production of the book.

“She was very demanding and knew exactly what she wanted,” said Kym. “A number of changes were made along the way but in the end, it worked out very well.”

Kym also has a showcase of some of her other work located in the town’s Art Space including a restored piano that she has decorated with her artwork. 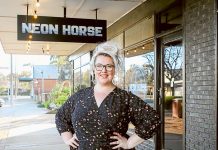