For many Australians, summer means swimming in pools and watching the cricket, with the Big Bash League a popular favourite. Beginning this weekend, the Goulburn Valley Bush Bash League will see teams compete in rural Victoria’s first franchised T20 competition.

The idea behind the league was to promote cricket to all community groups, using the success of the Big Bash with the support of Cricket Australia and Cricket Victoria.

The Valley’s best will go head-to-head, with teams made up of at least one U19 player and up to two key players, giving others the chance to play with and against the best cricketers in the region. One of the star players is Tarisai Musakanda, who has played international cricket for Zimbabwe and will be playing with the Cobram Panel Works Panthers.

Round one begins this Sunday, January 12 at the Barooga Recreation Reserve. Game one will see the Hurley Hotel Hound take on the SRP Mud Dogs at 11am, followed by the Cobram Panel Works Panthers versus the Jarvis Delahey Crushers at 2:45pm.

Round two will be held at the Northern Oval, Kyabram on Sunday, January 19, and round three will be at Deakin Reserve, Shepparton on Sunday, February 2.

Entry is a gold coin donation, and more information can be found at GV Bush Bash League on Facebook. 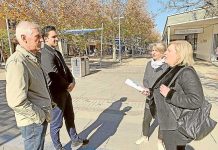 Let’s talk about the Lower Lakes