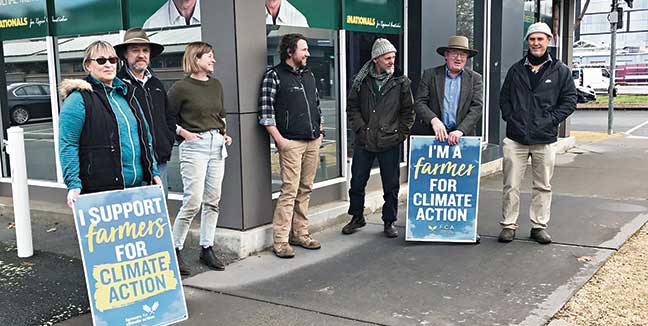 This comes as the Victorian Nationals sought to disaffiliate with the Federal Party over concerns the new Deputy Prime Minister and Leader of the Nationals, Barnaby Joyce didn’t take climate change seriously.

Farmers for Climate Action travelled to Mr Drum’s Shepparton office to deliver an open letter signed by more than 20 farmers from the Nicholls electorate.

John Pettigrew, a retired Goulburn Valley fruit grower from Bunbartha, says rural Australians want stronger climate action and is urging Mr Drum to speak up for the electorate. “Our rural industries are at risk of export barriers because of Australia’s lagging carbon emission policies,” he said.

“I’ve been concerned about climate change for over a decade, having seen the impacts first hand on the local dairy and fruit industries.”

Seymour vegetable farmer, Chloe Fox, says the Nationals shouldn’t discount the reality of farmers, particularly if they want to represent them. “Farming is always challenging, vegetable growing is never easy. If we don’t take climate change seriously, we’re not going to have the same access to food that we do,” said Chloe.

Damian Drum, the Federal Member for Nicholls said in response to the visit, “I always welcome communication and feedback from residents in my electorate.”

“The Federal Government is delivering a ‘technology not taxes’ approach, set out in our Technology Investment Roadmap, to pursue emissions reductions that are achievable, responsible, and balanced, without imposing new costs on households, farmers or regional communities.

“Of particular importance to agriculture, the Roadmap’s inaugural Low Emissions Technology Statement identifies soil carbon measurement as a priority technology to lower emissions, and livestock feeds and supplements as an emerging technology.

“The Federal Government is also continuing to support the agriculture sector to adapt and build resilience to a changing climate while increasing productivity and profitability through programs such as the $5 billion Future Drought Fund, the $66 million Agriculture Stewardship Package, and the $214 million soil package, which will support the implementation of the National Soil Strategy outlining how Australia will value, manage and improve its soil for the next 20 years.”

Earlier this month, the United Nations ranked Australia last out of more than 170 U.N. members surveyed for action on climate change.

Getting to know your candidates

What’s even rarer than a diamond?

Expert care to keep you smiling