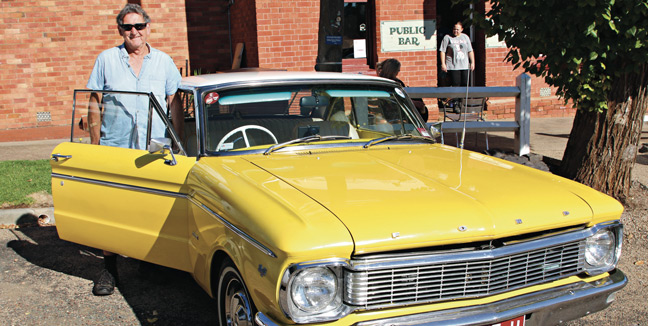 THE XP Falcon came along in 1965 at the end of the line for the first-generation Falcons.

The main change from the previous XM model was the ‘torque frame box’ steel subframe which added structural rigidity to the car, while Ford finally sorted the issues affecting the suspension and brakes. The XP’s styling was more masculine than previous Falcons.

The XP was praised in its day for its ability to do everything well with neat handling, strong brake performance and improved build quality, even a rattle-free cabin.

Owner, Viv Bourke has taken his XP to Queensland twice without any problems even though the vehicle is more than 50 years old.

The running gear and most other components stayed the same from the XM through to the XP. All of the utility, sedan delivery, and taxi/police kit vehicles had five-lug 13-inch wheels and larger 10-inch drum brakes.

To prove just how thorough the design team had been, Ford management (under the leadership of deputy managing director, Bill Bourke) devised a very clever marketing initiative, the Falcon XP ‘Durability Run’.

Five Falcons were pushed to the limit around Victoria’s You Yang’s proving facility, the goal was to rack up an incredible 70,000 miles at an average speed of 70 miles per hour! Despite the audacity of the undertaking, and the fact that some of the cars rolled, after eight and half days all five would finish, with an average speed a little over 71 mph. Little wonder the XP would take out that years “Wheels Car of the Year” award.

If the van’s rockin’

New faces and experiences to be found at Aquamoves