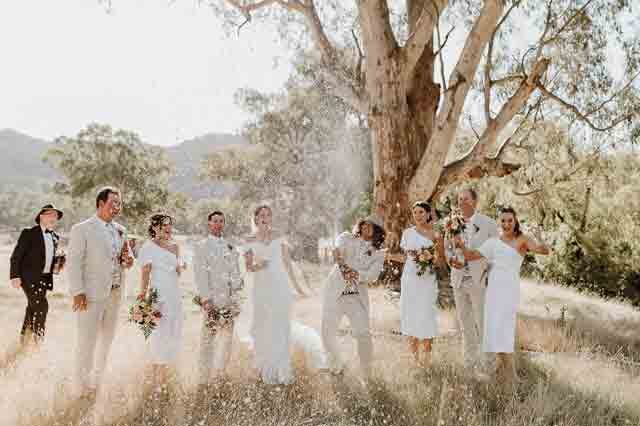 Sally and Dyl met in year 8, but the timing wasn’t right. Plus, his muscles weren’t big enough yet.

“I wasn’t looking for a relationship much to Dyl’s disappointment, so I kept shrugging him off,” said Sally.

“It wasn’t until he left school and I was in year 12 that we met again, and as Dyl puts it, he grew some muscles which caught my attention. I was hook, line and sinker from then on.”

Married at Trawool Estate, the highlight of their day was the ceremony, presided by Allison Durling of ’till death with Durlo’.

“We raffled off who would be our witnesses, obviously it was a pre-determined result, but both our grandpas thought they were the luckiest people at the wedding. When it came time to sign, we drew two names out of Dyl’s hat and our grandpas were over the moon, two out of 135 odd people and they were selected to witness our marriage, it was so fun!”

Sally said her dress was simple but a perfect reflection of her, as was her ring that Dyl chose on his own.

Sally and Dyl both advise couples to try and get 20 minutes to themselves on their wedding day to let it all soak in.

“The day flies by so darn quickly so it’s nice to sit back and reflect on what an amazing day it has been, before the night is over.”

It is National Skills Week!